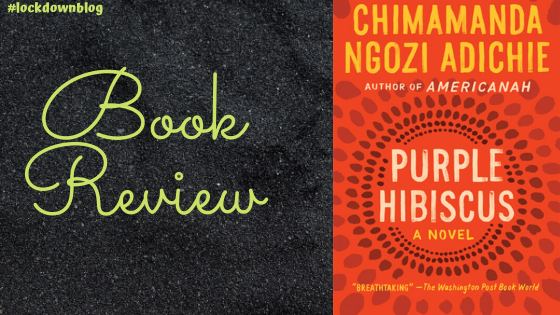 Purple Hibiscus, narrated from the perspective of 15-year old Kambili, whose father, Eugene, was affluent and a ‘strict and very adherent’ Christian. He related with his family with the special kind of love that he knew.

Even though the family seemed comfortable, they lived on a ticking time bomb that started erupting when Kambili, her brother, Jaja and their mum came into contact with Eugene’s liberal sister and widow/lecturer at the University in Nsukka and her three children.

One visit to Ifeoma’s home, which later paved way for several others, became the mirror that revealed all that Jaja and Kambili lacked, even in their affluence.

Purple Hibiscus is beautifully written, keeping the reader in suspense. It also reveals the thin line that may exist between religion and fanaticism.

The introduction of Father Amadi in Nsukka and Kambili’s crush on this personality, who has sworn to be celibate all his life, is my favourite part of the book. 😊😊

The tragic twist to the plot in the concluding parts caught me offguard. It left me with mixed emotions.

*19th post of the 21 day lock down blog challenge and the writing prompt is: Review Something*

My Tweets
Join 1,101 other subscribers