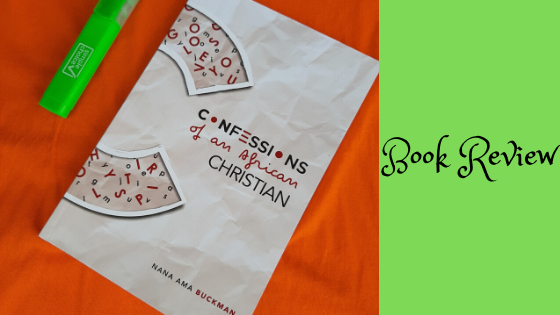 Initially, I thought the Confessions of an African Christian was a novel. From the title also, I perceived I was going to read something hilarious and fun and not too serious but as I dug deeper into Nana Ama Buckman’s 94-page memoir, my mind began reflecting on my Christian walk. I critically assessed myself.

This book can pass as a modern-day evangelistic tool with regards to its content. The words were plain, truthful and piercing. I’m not too sure if I have seen this kind of writing yet, particularly, in the Christian sphere. Confessions of an African Christian was broken down into short chapters with each dealing with a specific topic bordering on Christianity. The author dealt with subjects like the Christian’s relationship with the Holy Spirit, with their pastors, on giving money particularly to the church, our mental health, among others.

Even though this book is not novel, I enjoyed the tiny bits of the author’s personal experiences relating to the subjects. Her style of writing was also frank, relatable and could easily be blog entries/posts.

The reader could also decipher how passionate the author was about the various subjects – they were well researched and situated in scripture. The book sets the reader’s mind contemplating, especially with the questions that were posed at the end of each chapter. They required a critical evaluation of one’s current stance based on what they’ve read. Also concluding each chapter were declarations and prayers.

If we can be truthful to ourselves, we’d admit that indeed, the modern Christian faces some tough challenges and a number of them were mentioned in the book. For instance, when we decide to put ‘God in our hearts’ to be seen and accepted as being ‘cool.’ Or when we have to silently battle emotional turmoils and depression with positive confessions while we require medical attention instead. The chapters that got me smiling the most were the ones that discussed money and pastors. They were painfully sincere. 😅😅

It is simply a good read particularly for those of us who are not into ‘prescriptive’ ‘right-in-your-face’ ‘do-this-do-that’ kind of Christian books. Confessions of an African Christian though bible-based is laced with the witty personal experiences of the writer. You are likely to act according to what is preached in the book without you realising it. It is a book I’ll recommend.

My Tweets
Join 1,100 other followers