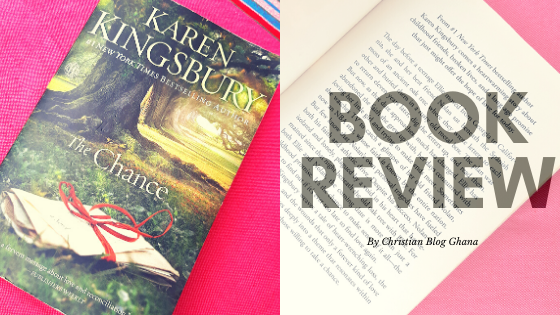 I acquired Karen Kingsbury’s book, The Chance, because I really needed to read a Christian novel from another author that I am not familiar with. Well, The Chance was a good diversion from Francine Rivers (my current favourite) and I hope to read more of her to make a better judgement of her writings.

The Chance describes Nolan Cook and Ellie Tucker who were childhood friends but broke apart when they were 15 years old. This was because of a ‘scandal’ involving Ellie’s mother who had had an extra marital affair with a music star resulting in a pregnancy. Ellie’s dad, in anger moved with her to another State (San Diego) and in the process, making her break communication with her childhood friend/sweetheart and her pregnant mother. Before Ellie and her dad moved, she and Nolan wrote letters to each other, buried the letters and made the promise of returning in 11 years to read the letters they had written. A lot happened within the 11 years with Nolan following his ultimate dream of being a basketball star and Ellie becoming a single mum and a hair stylist (a little different from her childhood ambitions). To find out what happened to their childhood promise, I think you need to get a copy of this book 🤣🤣

The theme of this book centered strongly on forgiveness and reconciliation. Alan Tucker (Ellie’s dad) believed he was more ‘Christian’ than any one else, thus, judging the people he loved harshly and in his actions, he tore his family into shreds. Before he realised what he had done, a lot of harm had been caused to the people he cherished the most. How are you using God’s word? Are you correcting people with it or pushing them further into sin?

Like Francine Rivers’ books, the characters did pray simple prayers, emphasizing on the point of prayer being a regular communication with God. Prayer doesn’t have to always be at a designated time and space but an act of speaking regularly to God concerning all issues throughout one’s day.

The 315-page novel was quite easy to read. The story line was somehow enthralling with the characters and their actions being described fairly vividly. There were portions in the book that moved me to tears (Nolan was quite an emotional character). Other portions made me feel I was watching a soap opera because it kept dragging and literally had me rolling my eyes (Especially, with Ellie. One of such instance was when she took to her heels because Nolan had finally found her after 11 years. Who does that?). I also think this book will make a good movie for teenagers.

I don’t know whether I fell so much in love with any of the characters like the way I loved (and still love) Roman Velasco in Francine River’s The Masterpiece but it was a pretty good book. I will wait till I read another Karen’s Kingsbury before I compare her books to Francine Rivers.

I will rate this book 3.5 out of 5 and will recommend it to any lover of both Christian and non Christian novels.

NB: I apologise for my long absence from blogging. I hope and pray to be more regular now. I would also love to use this opportunity to say thank you to all new followers of the blog. Even in my long absence, I kept receiving notifications of new followers and likes for existing posts on the blog.