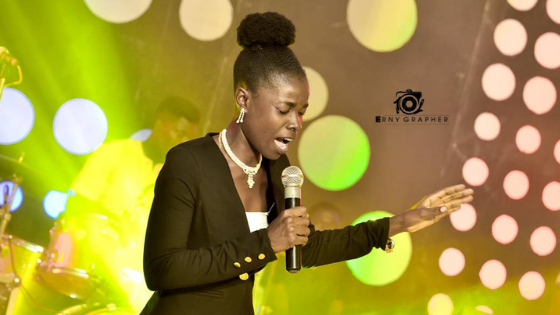 Her dreams of wearing high heels and working in corporate Ghana as an Accountant was cut short a few months after she graduated from the Pentecost University with a Bachelor of Science Degree in Accounting. She wears high heels, though, but this time she stands in front of large congregations and her mission is to win souls, heal the sick and encourage everyone through her eight-track gospel album.

The musician, who completed Achimota School in 2006, is also a pastor at Zoe Outreach Embassy in Accra. Ivy Okyere’s life and dreams were altered when she began her national service and had a near-death experience.

“In November 2011, I fell sick and appeared somewhere that I can’t tell but I knew it is some kind of spiritual experience,” Miss Okyere said.

In what appeared to be a vision, the gospel musician went to a ‘certain place’ where she saw people dressed in white gowns and in there, she began to ask questions.

“I saw people in a queue as if they were going somewhere. A man walked up to me and told me that these people are going to present themselves to a king,” she said. “The man said I should not join because I was not part but I could only observe.”

According to the musician, that was when she moved out of the queue and became more conscious of her environment. She does not remember how she came out of the trance but what the singer recalls was the instruction she received from the ‘man’ in the said experience.

“Go and sing because this is the time for you to sing,” the exact words of the unknown man in the ‘experience.’

It was with this instruction and later, a confirmation from another Man-of-God [name witheld] that Miss Okyere, with no prior experience in singing, began to work on her album that was released in April, this year. In between heeding to the call and to the release of her debut album, the singer made some adjustments to her career and prepared herself to do full-time ministry.

“I was working in Multicredit Savings and Loans in Kumasi before I moved to Accra and I have worked in an automobile company. Currently, I am in the process of setting my own business,” said Miss Okyere.

The musician recounts with excitement, how close friends and family react when they listen to her songs for the first time. Most of them are surprised at how an aspiring accountant could switch into full-time gospel ministry because, to them, the change has been ‘drastic.’

“They are happy. Everybody goes like I am happy for you. Everybody goes like the songs are powerful. Everybody goes like you hear the lyrics clearly and they are biblical,” she said. “It’s amazing that the whole thing happened just like that. I remember, the first time people heard me singing, actually even my own mother, she was like ‘how, what happened to you?’[Miss Okyere giggles] No one actually knew I had the voice to sing but right after the encounter, I began to have this whole experience. So it’s amazing,” the gospel artiste added.

When questioned on the choice of her style of music, Miss Okyere remarks they are exactly what she receives in her spirit. Unlike some gospel musicians who write songs based on their experiences, she receives her inspiration while she worships and prays.

“Sometimes, I see myself singing in a dream and when I wake up, I still have the songs. What I do is I write them or I pick my phone and record them,” she said.

Her favourite track on the album is the praise song titled ‘Nkunim’ [meaning victory]. She likes it because even though she received a revelation of it, the song summarises her experiences.

“Nkunim because I believe that through all the experiences I’ve had, the Lord gave me the victory. I have other songs that portray that but for now, that is my favorite,” she said.

Miss Okyere lists Don Moen, Sinach, Nathaniel Bassey, Joe Mettle, and Willy and Mike as some gospel musicians who inspire her but commenting on the current gospel tracks being produced in Ghana, the singer believes artists should be more focused on spreading the word of God.

“Money is good, fame is good and I think you have to use your talent but you shouldn’t neglect the fact that we are in the ministry with a purpose. It is a call and you have to heed to the call and not any other thing,” she said.

The gospel artiste, together with her team, are working on shooting music videos, finding radio slots to lead live-worship sessions and preparing to record tunes for her next album. In subsequent releases, she hopes to translate the songs into several other languages.

“That is what the Bible says and this is the ministry the Lord has given me. I also need to make sure that every tongue, every tribe, everybody understands the message to know what the Lord is doing, so, it is going to be in different languages and the songs will be all over the globe,” Miss Okyere said.

“For upcoming gospel artiste, I would say, once you are in, do things right. Do not imitate the bad but correct what you think is wrong and stay focused. As long as you have chosen to go with the gospel, remember Jesus is the reason for the gospel. Do it the Jesus’ way. Say it right and sing it right by portraying what it stands for,” she concluded.

To listen to Miss Okyere’s album, please click on the play button. Let us know what you think about her tracks in the comment box. 😊