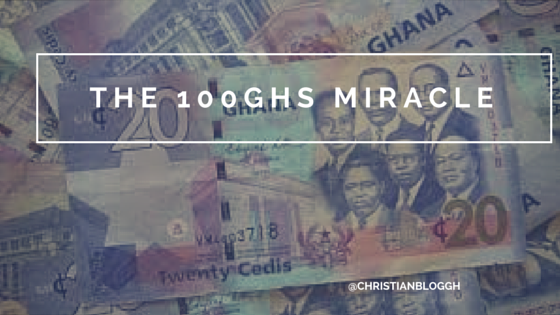 I went to church that morning and there was a guest speaker from a neighbouring church delivering the sermon. This was about three years ago when I had completed College. I sat through the service and I remember his sermon was on the power of the Holy Spirit.

When he finished his sermon, he asked us to give an offering; something that we had not given to God before. Personally, I had never given any money to the church except the regular church offerings that I often put in the bowl. As the preacher started mentioning some amounts I sat and stared but immediately he mentioned a hundred cedis, I felt a thud in my heart; it was as if something was pulling me to stand.

I know you might be wondering why I am making a fuss over a 100GHS. This was because I had just completed college and I had no money in my account except that 100GHS that was given to me by a firm I was working for and the 100 GHS was their ex gratia. Apart from that I had nothing else in my account.

I could not sit down comfortably anymore because the prompting in my heart had increased. I joined the members of the congregation that had taken the bold step of faith. Before we made our pledges, we were asked to say a prayer and mine was that I needed a good place to offer my National Service and a better job afterwards.

At the time I stood at the altar, I had no idea of the scripture in 2 Samuel 24:24 where David replied King Aranuah saying, No, I insist on paying you for it. I will not sacrifice to the Lord my God burnt offerings that cost me nothing …..

The 100 cedis that I offered the church did cost me much. I did not feel the pain till I stood in front of the ATM to withdraw the money. When I put it in the envelope, I knew this was a very big sacrifice I was making because it was going to cost me even money for transportation.

Although, I felt the pain when I made my sacrifice I knew God was going to bless me and indeed,  He has. I had a great place right here in Accra to offer my National Service and I did not even complete it because I had another wonderful job offer. There have been several employments after that National Service and I know it was because if that sacrifice I made at the altar on that fateful day.

What have you given to God which cost you so but after a while you saw some amazing results? Let’s hear your story. Our email address is christianblogghana@gmail.com

2 thoughts on “The Miracle of a 100GHS Offering”